After a load of stress with internet and the suchlike, everything is back to normality, as soon as we work out what normal is.

Since the rain has returned to our sceptred isle, the grass in the back garden has become a nightmare. A friend of mine was recently jealous of my backyard greenery, but she doesn’t realise that to get some lawn hoovering done requires moving all the pots and flora so I can find room to get the lawnmower onto the grass.

The sudden turn in the weather has made life hard for the plants, some are drowning, and some are now cold. I would be the first to admit that I started things a little late in the year, but as I have no idea what I am doing, this should come as no surprise. 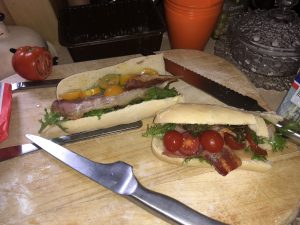 After successfully growing a plethora of red and yellow tomatoes, I decided to have a tomato-off. Which of the contenders could T up the classic BLT? Well, this isn’t a telly quiz show so I won’t hold you in too much suspense. I was very surprised that the red ones were sweeter than the yellows. Sylvester will be disappointed, but I’m sure he won’t take it personally, as so far he is the only individually named tomato plant.

I will admit the loss of the internet for the last month has thrown me off my game a little, so I will try and get more organised in future, but here’s a random pic of a little dude enjoying what the slugs left of one of my sunflowers. 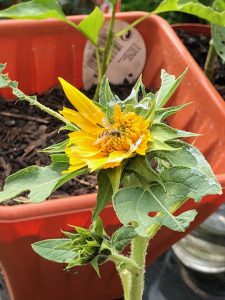